Our Mission: We, the people of St. Philip Catholic Church, as disciples of Jesus Christ, joyfully celebrate the Eucharist as a community and share and proclaim the Word of God to our neighbors.

Guided by the traditions of the past and with a clear focus on our future, St. Philip strives to retain the vision of those early families who struggled to bring the Catholic faith to Franklin by reaching out to the community. Today, St. Philip Catholic Church continues to do so as one of Franklin’s most dynamic Christian churches. 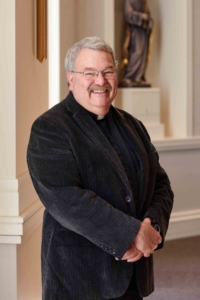 Father Edward F. Steiner, son of Edward & Mary Neligan Steiner, Jr., was born in Chattanooga. In 1976 his family moved to Clearwater, Florida but Father Ed, a senior in college, elected to continue his priestly studies for Nashville instead of moving to Florida. He has two younger sisters, Laura Steiner Wade, living in Odessa, Florida, and Elizabeth Steiner Herbst, whose family lives in Stuart, Florida. Father Ed’s father died in 1996. His mother, Mary, lives in Nashville.

Father Ed double-majored at Saint Meinrad Seminary College in Theatre (directing) and English (Creative Writing). He went on to study at the North American College in Rome and finished his graduate studies at The Catholic University of America. Father Ed later earned his Doctor of Ministry in Homiletics (D. Min.) from The Aquinas Institute of Theology at Saint Louis University. His experiences as a priest have been varied. In addition to his normal priestly assignments, he participated in Search & Rescue for 12 years as a bloodhound handler. He was a volunteer chaplain for the Nashville Police Department and at the behest of the Nashville Fire Department trained as a Critical Incident Stress Debriefer. Father Ed also spent six years as a civilian chaplain at Fort Campbell while serving as pastor of Immaculate Conception parish in Clarksville. Currently Father serves as the Catholic Chaplain to the Tennessee Titans.

Father Ed loves to fish, primarily for bass. A history buff, he also loves to immerse himself in local history. (Of which there is an unlimited supply in Franklin!) Father Ed loves all things medical, and before God hit him with a two-by-four, was set to go pre-med. His television only has a few channels: history, science, engineering and, of course, football. His favorite color: green. His favorite food: at your house.

Fun Fact: St. Philip Church was founded in 1871 and initially was served by traveling priests. The first full-time residential pastor was Father John Alphonse Nolan, who was appointed pastor in 1898. Father Nolan’s Irish family had immigrated to Chattanooga, where connection was made through Father Ed’s mother’s family. It takes a bit of genealogical math but Father John Nolan’s Irish grandparents, John Nowlin and Margaret Alyward, are Father Ed’s great-great-great-grandparents! 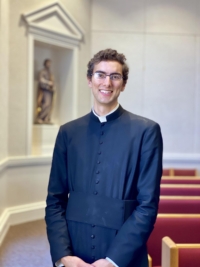 Father Rhodes Bolster is a Nashville native, the son of a cradle Catholic and a convert, attending Overbrook School and Father Ryan High School in Nashville where he was involved in music and theater. He was also very active in Fraternus when it was instituted at the Cathedral of the Incarnation.

After one year at the Catholic University of America in Washington, DC, Fr. Bolster entered the seminary at the Pontifical College Josephinum in Columbus, Ohio. From there he went to Rome to study theology. On May 25, 2019, he was ordained a priest for the Diocese of Nashville at the Cathedral of the Incarnation.

His mom, Alice, lives in the house in Nashville where he grew up, and was a nurse and a realtor. She flipped houses while he was growing up, and Fr. Bolster helped some with that. Robert, his Dad, was a Nashville native and worked as a banker for many years. He passed away two years ago. His older brother, Max, lives in Lebanon and works as a care manager at a mental health clinic.

Fun Facts: Father Bolster has sung at TPAC, met Pope Francis while studying in Rome and is a juggler.

Proverbs 29:18 says that “Where there is no vision, the people perish.”

Many people fail in life, not for lack of ability or brains or even courage, but simply because they have never organized their energies around a goal.
~Elbert Hubbard

During the Parish Pastoral Council Retreat in January of 2017, the desire was expressed to do a thorough review of our work as a parish, and earnestly seek where God is calling us to be in the next 5-10 years. Because of this, the Rev. Ashley Abarca-Mitchell was invited to share about her work using the Appreciative Inquiry model with healthy parishes as a new approach to Visioning and Strategic planning.

She proposed that that during our time together we would focus on a healthy parish model set forth in Acts 2:42-47 modeling fellowship, discipleship, worship, ministry and evangelism. Our process work would focus on:

a. Clarity of mission and vision- the why
b. Authentic community
c. Communication

This would require 3 months of high intensity work on behalf of a leadership team and the entire parish and 12-60 months of implementation.

Prayer is first and foremost. We must begin with prayer- for the leadership team and the entire parish. During the first 30 days, we met with Priests, staff, leadership teams and core groups to ask questions, build relationships and gain insight into the questions we needed ask during our visioning sessions.

Below is a full report of the process

Sanctus Report
To watch Mass and our other Livestream events...Click Here
+ +
Go to Top